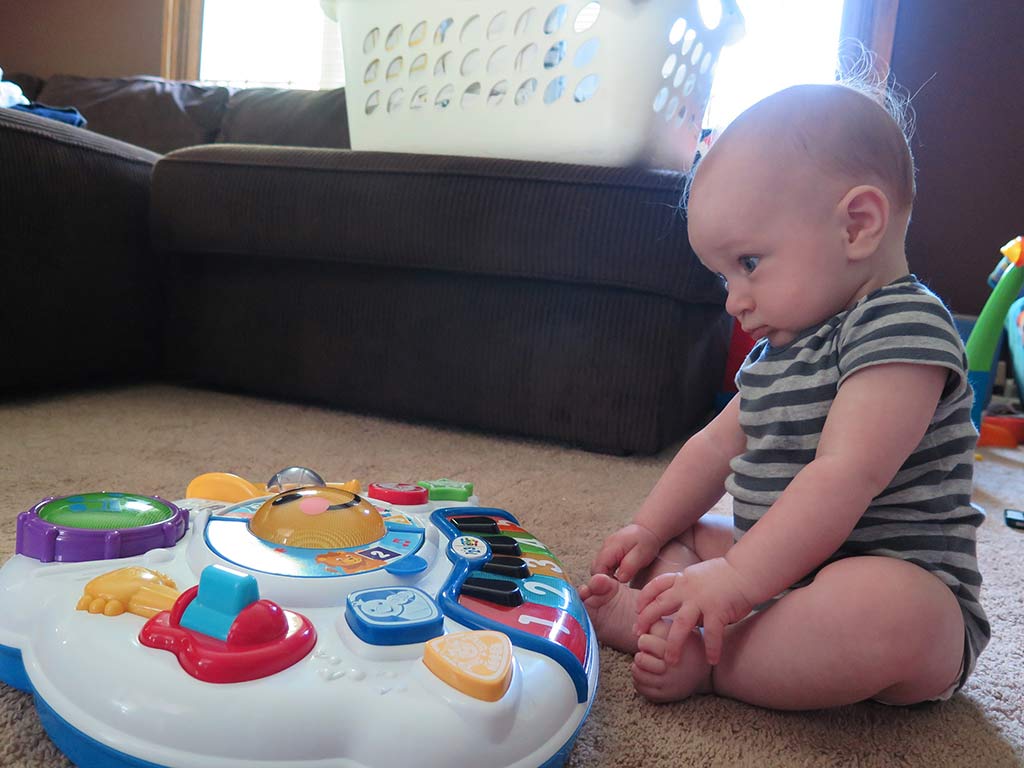 It occurred to me recently that, while I’ve mentioned him in passing, I don’t talk about Sam too in-depth here. I guess the reasoning behind that is two-pronged — one, parenting is kind of “old hat” at this point. I got this. Two, I kind of dread becoming the parent that does nothing but talk about their children. Because when I was young and childless, the last thing I was interested in was someone else’s kids.

Anyway, the 26th marked his 7th month on Earth. Well, first off, the kid is mobile. He can crawl — not with any sort of elegance or speed, mind you, but he can definitely drag himself about the room. This last week he even started trying to pull himself up on various stuff.

He’s got a strong interest in real food now, and we’ve been feeding him the usual baby foods and he’s been tearing into them. He actually gets mad if you take them away from him. It’s quite funny.

In a lot of ways, it feels like he’s further along the curve than Eddy was, but I have to keep reminding myself that Eddy was born two months early and is on a different grading curve because of it.

He’s also definitely got his features from Kate’s side of the family — his skin tone and red (yes, definitely red for sure) hair aren’t present in my family, that’s for sure.

In the last month or so, Sam’s definitely come alive in this regard. His vocalizations are a lot more obvious than Eddy’s were, even accounting for the preemie status. He’s making a lot of “ma” and “da” sounds, and we’re starting to see some loose correlation to parental presence. He’s also experimenting a lot with volume control now, too, which is both entertaining and ear-splitting.

He’s gotten to the point now where he observes things a lot more and when down on the floor will scoot himself over to investigate anything that’s bright, shiny, or otherwise interesting.

This is a pretty happy baby. His laugh is loud and infectious, as well as frequent. Lots of smiles. He’s also pretty good at voicing his frustrations with a lot of moaning when he’s trying to fall asleep but can’t. He’s still definitely got a strong mommy preference, but lights up when I come home from work, and has a strong interest in his older brother.

Great kid. We’re finally starting to become simpatico. He’s going to be a fun one to watch and interact with as he gets older.